The FSC General Assembly, FSC’s highest decision-making authority brings to life, FSC’s core strength of being a community for co-creation: convening members and partners from diverse interests to set global benchmarks for forest stewardship and deliver meaningful results for the forests and the people who depend on them.

The FSC General Assembly typically takes place every three years but was postponed due to the pandemic with the last in-person GA having taken place in Canada in 2017. The 2021-2022 GA was the first opportunity since then for FSC’s global membership to come together, and the first hybrid GA in the history of FSC, which allowed Members to participate and vote remotely. “Despite the challenges brought by the pandemic, FSC Members remained committed and leveraged online platforms to continue the work. An example of the tremendous commitment of FSC membership to our mission and ensuring forests for all forever.” said Zandra Martinez, FSC International Board of Directors Chair.

Throughout the week participants engaged in a diverse programme under the theme of ‘Shaping solutions for resilient forests.’

At the core of the general assembly, is the Members Assembly, which highlighted FSC’s unique chamber balanced democratic governance system in action.  FSC Members from all three chambers (Social, Economic and Environmental) used their voting power to determine which motions (proposals for new work areas or improvements to the FSC system) would be passed for implementation, bringing change, and setting the future direction of FSC. 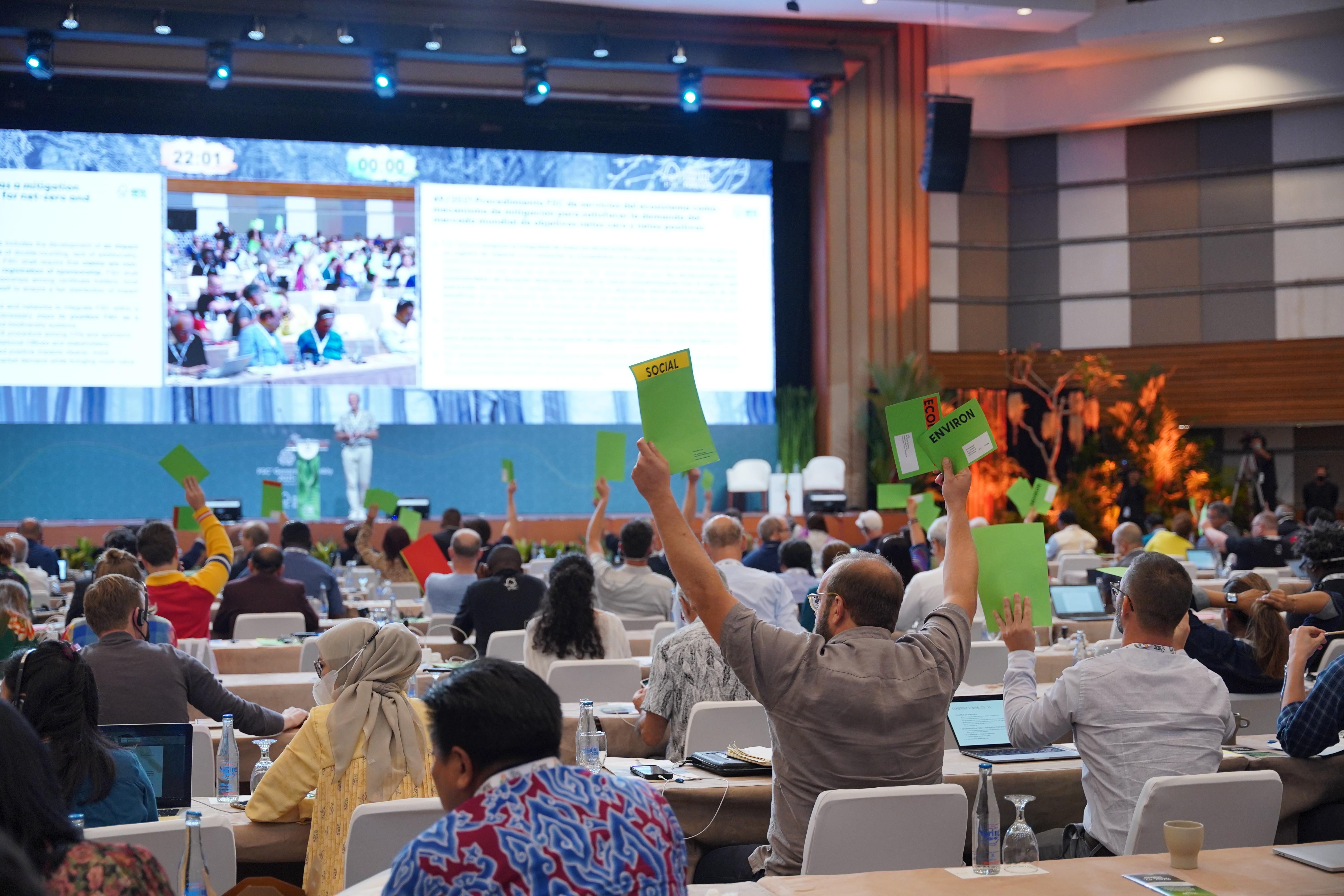 The motions passed for implementation include:

French will be added as the third official language for FSC in addition to English and Spanish. Within the FSC family, there are many francophone members, particularly in Africa, and in the Congo Basin Forests (second lung of the earth). The approval of this motion reinforces FSC’s commitment to inclusiveness and diversity.

The new approach combines requirements for protection of Intact Forests Landscapes inside the certified areas with a focus on the status of IFLs in the surrounding landscape. It also requires recognition of the territories of Indigenous Peoples as so-called Indigenous Cultural Landscapes (ICL’s). Watch this video to learn more.

Motion 37: Required changes to the FSC Principles and Criteria to implement the Policy to Address Conversion and Motion 45: Enhance and Improve the Conversion and Remedy Package to Protect FSC’s Credibility

Implementing these motions will provide a route by which millions of hectares of forests can be restored and then become FSC certified and managed in a responsible manner according to the FSC Principles and Criteria. With this, FSC can be increasingly relevant in the restoration space as a tool that provides market incentive to restore deforested and degraded land. And, not least importantly, FSC keeps its relevance as a tool to provide remediation for thousands of people affected in the past by poor forest management practices. Watch this video to learn more.

FSC shall allow the use of claims generated from the Ecosystem Service Procedure to demonstrate progress towards achieving net-zero and net-positive targets for climate, biodiversity, and water at all stages of the mitigation hierarchy, including measurement, avoidance, reduction, restoration, and compensation or neutralisation of residual impacts within and beyond value chains.

Motion 53: Policy Motion to incorporate to ecosystem services the recognition of cultural services and practices to strengthen and endure over time the interconnection of Indigenous Peoples

This motion proposes to use the Ecosystem Services Procedure to enable Indigenous and Traditional Peoples to demonstrate the impacts their continuing practices have on maintaining culture, knowledge and ecological health and so develop market claims which can be financially or/and politically rewarded and so sustain these communities.

The motion proposes for certified organisations to grant trade union representatives access to workers to ensure that workers are well informed and aware of their rights in the workplace.

Motion 51: Policy Motion on the right of workers to elect their own Occupational Health and safety representative(s)

The main goal of this motion is to guarantee that workers have the right to frequently and freely elect occupational health and safety representatives in all FSC certified organizations, considering the number of workers and the occupational risks involved.

Reflecting on the outcomes of the Members’ Assembly, Zandra Martinez, Chair of the FSC International Board of Directors said: The decisions taken by our Membership during this general assembly have set a clear direction for FSC to further strengthening our relevance and the significant role of forest stewardship in overcoming current challenges. We remain committed to implementing the decisions by our members to shape and generate quicker responsible solutions for resilient forests, social justice, and the challenges of climate change.

The FSC Board of Directors will oversee the implementation process of the motions and ensure that these changes and improvements are realized as efficiently as possible. We look forward to sharing the plans and progress on the implementation and further demonstrating the value and benefits of forest stewardship through these actions.”

The list of the motions and voting outcomes is available on ga.fsc.org

Participants also engaged in a variety of keynote sessions, side events and exhibitions during the week which focused on exploring solutions to challenges related to forests, including biodiversity loss, social inequities, and climate change.

A keynote on Scaling up Forest-Based Solutions for Climate Change, Biodiversity Loss and Forest Degradation explored the elements of the FSC Global Strategy 2021-2026 aimed at expanding the reach of FSC’s relevance in the fight against climate change and loss of biodiversity as well as the significant role of partnerships and collaboration in moving forward.

“Our clear mission is that FSC will bring forests to the center of coordinated climate actions and make FSC a central actor on the climate front,” said Janne Näräkkä, FSC International Board Member. “Partnerships are in the center of all solutions; we will not do this alone.” The conversation was supported by input and stories from partners, including an address from Gabon’s Minister of Water, Forests, the Sea, and Environment, charged with Climate Change, SDGs and Land-use Planning, Lee White who said, “We see FSC as a key component to the future of forestry of Gabon,” all of Gabon’s forest activities are engaged with certification at some level – starting with legality and moving into ecosystem services.” 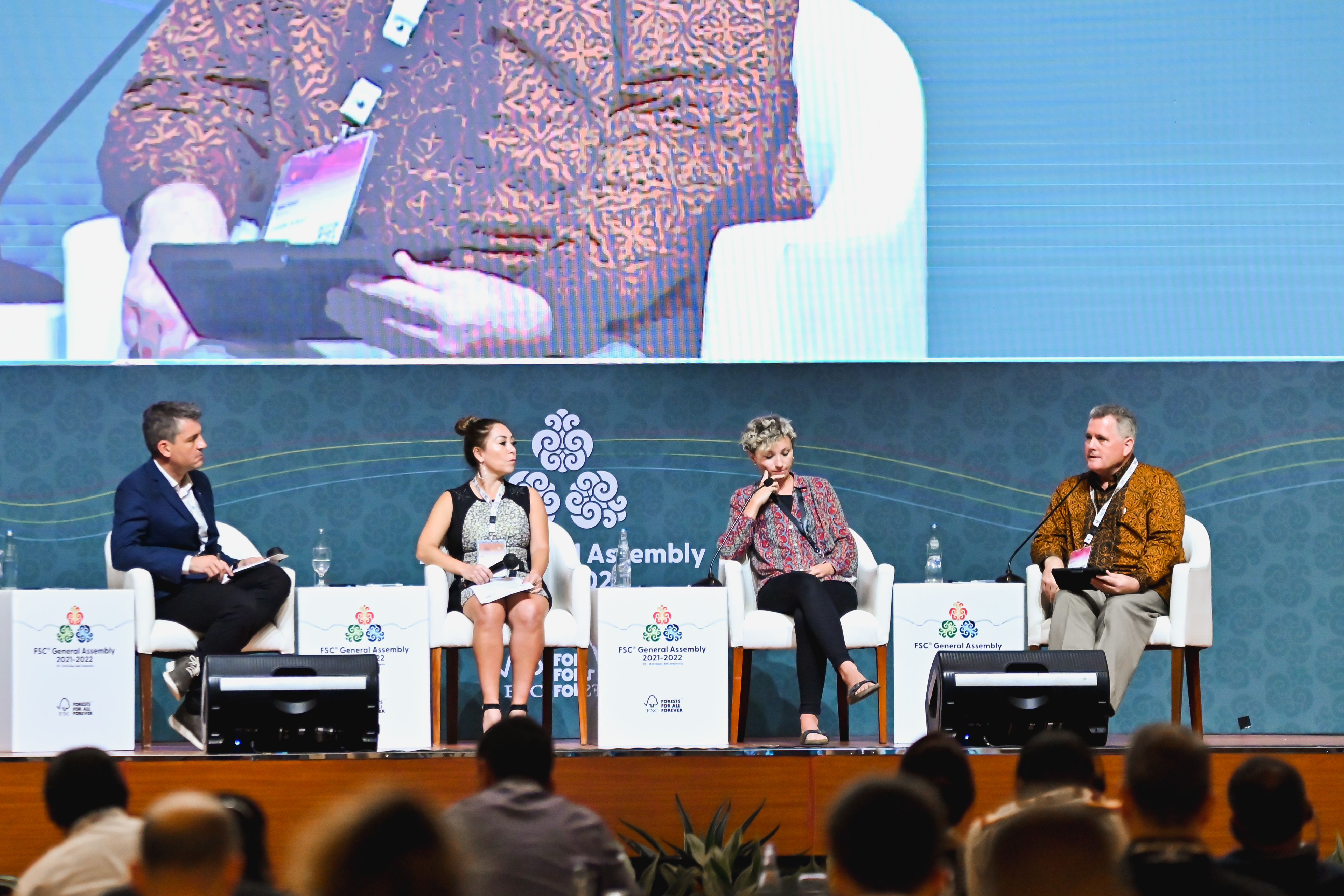 ‘Transforming Forest Solutions Together with Indigenous Peoples, Communities, Smallholders, and Workers’ was another central topic. A keynote session celebrated people, highlighting the stewards who play a crucial role in the responsible use of forests as well as the people who are part of the value chain for forest-based materials. Stories from the ground included those on workers' rights, giving a voice to smallholders as well as Indigenous Peoples rights. The conversation continued through various side events. Learn more about the importance of Community and Family Forests in this video. 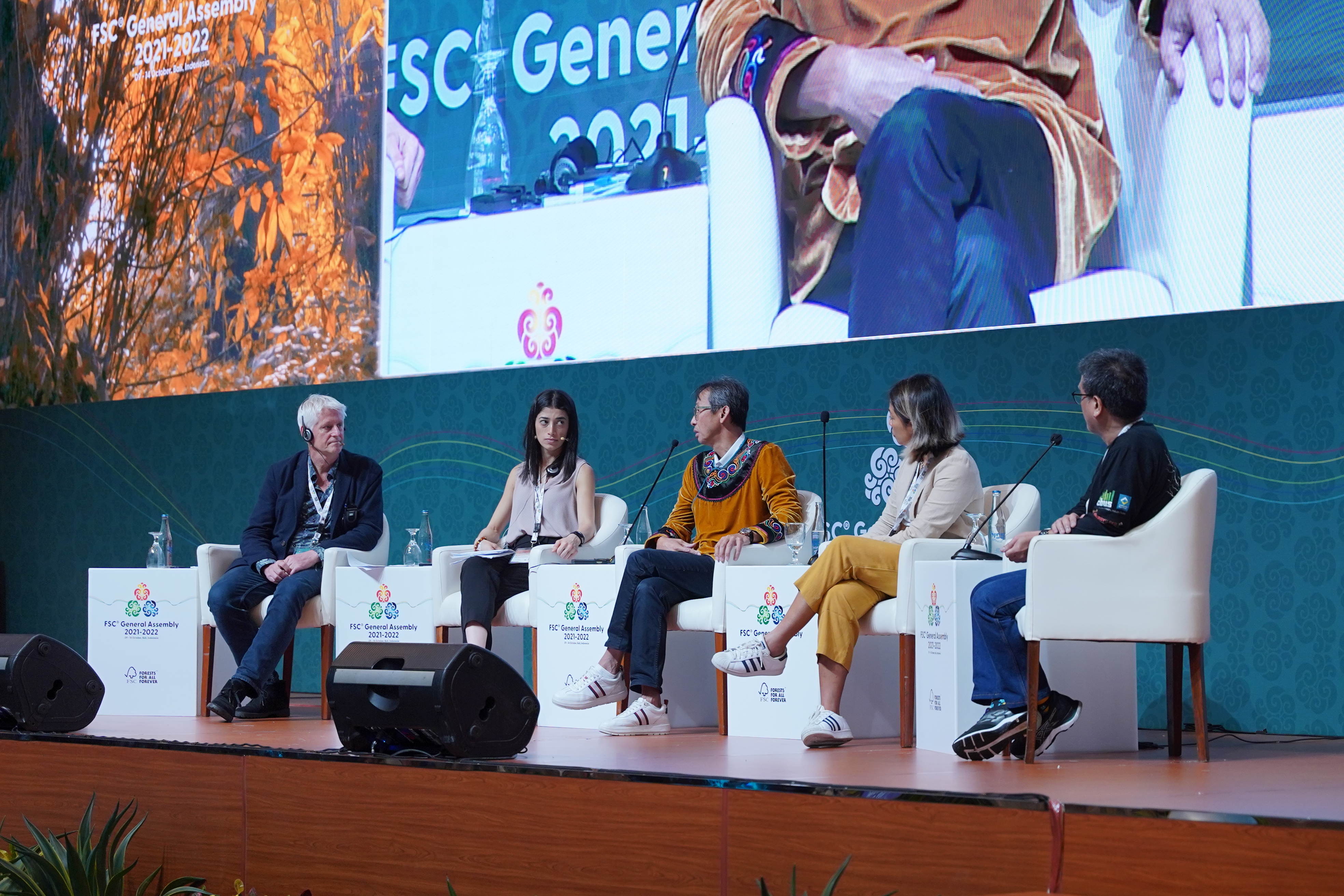 Demonstrating the Value of Forests, Forest Products and Services as Catalysts for the Sustainable Development Goals (SDGs) was addressed during a keynote which explored FSC’s relevance to the SDGs from different perspectives including voices from intergovernmental organizations, businesses, NGOs, governments and the financial sector on how FSC solutions can become more relevant and better suited to meet the needs of global agendas as well as the role of markets, partnerships, and collaboration.

During the keynote, a common theme was SDG 17, partnership for the goals, highlighting the importance of working collaboratively towards reaching the SDG’s: “We cannot do this alone. We cannot bring changes in nature without collaboration, partnerships and learning from each other,” said Dr Musonda Mumba, panel guest and Secretary General at the Convention on Wetlands & FSC Africa Advisory Committee Member.

Fernanda Rodrigues, Board member of Forest Women´s Network, talked about SDG 5 on gender equality, underlining FSC’s key role in leading by example, saying: “FSC is the world’s most credible forest certification system and I think FSC plays a very important role inspiring other sectors to also promote gender equality within their systems.” Gender and Diversity was also highlighted during a side meeting which included the participation of students from the International Forestry Students Association (IFSA). A presentation and poster ‘Calling for gender-aware and inclusive practices in forest education - an open letter by IFSA’ was praised by FSC’s leadership who highlighted the essential role of youth to advance FSC’s mission.

During the keynote on FSC highlights from the regions, participants heard about FSC’s impact and achievements on the ground with stories from regional representatives from Africa, Europe, CIS, Latin America, North America and Asia Pacific. 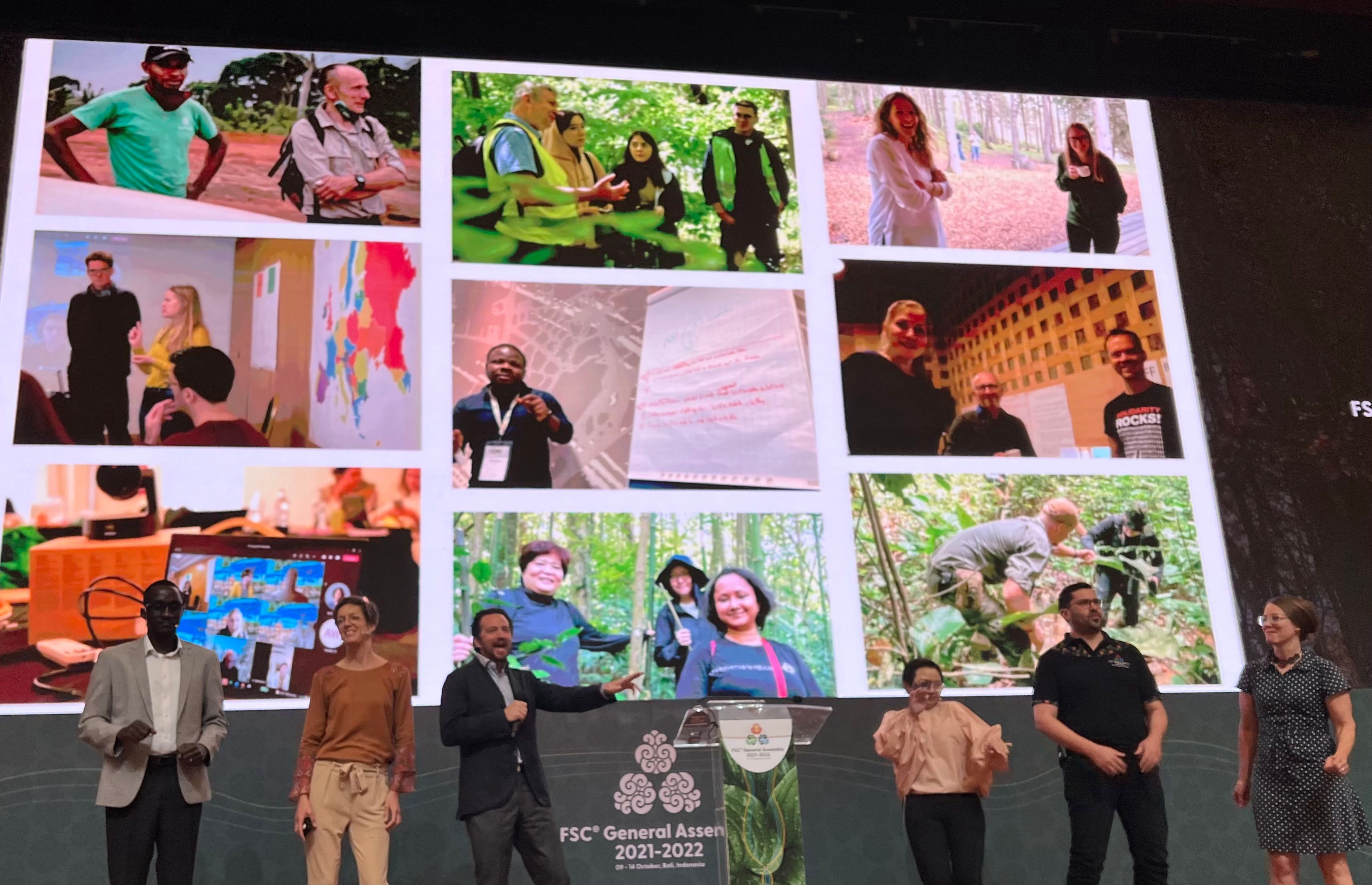 Reflecting on the week, Zandra Martinez said: “This GA has demonstrated how committed we as FSC and all our members remain to ensuring responsible management of the world’s forests. It has demonstrated the power of our democratic and participative system in bringing diverse perspectives together to find solutions that put forests first.” 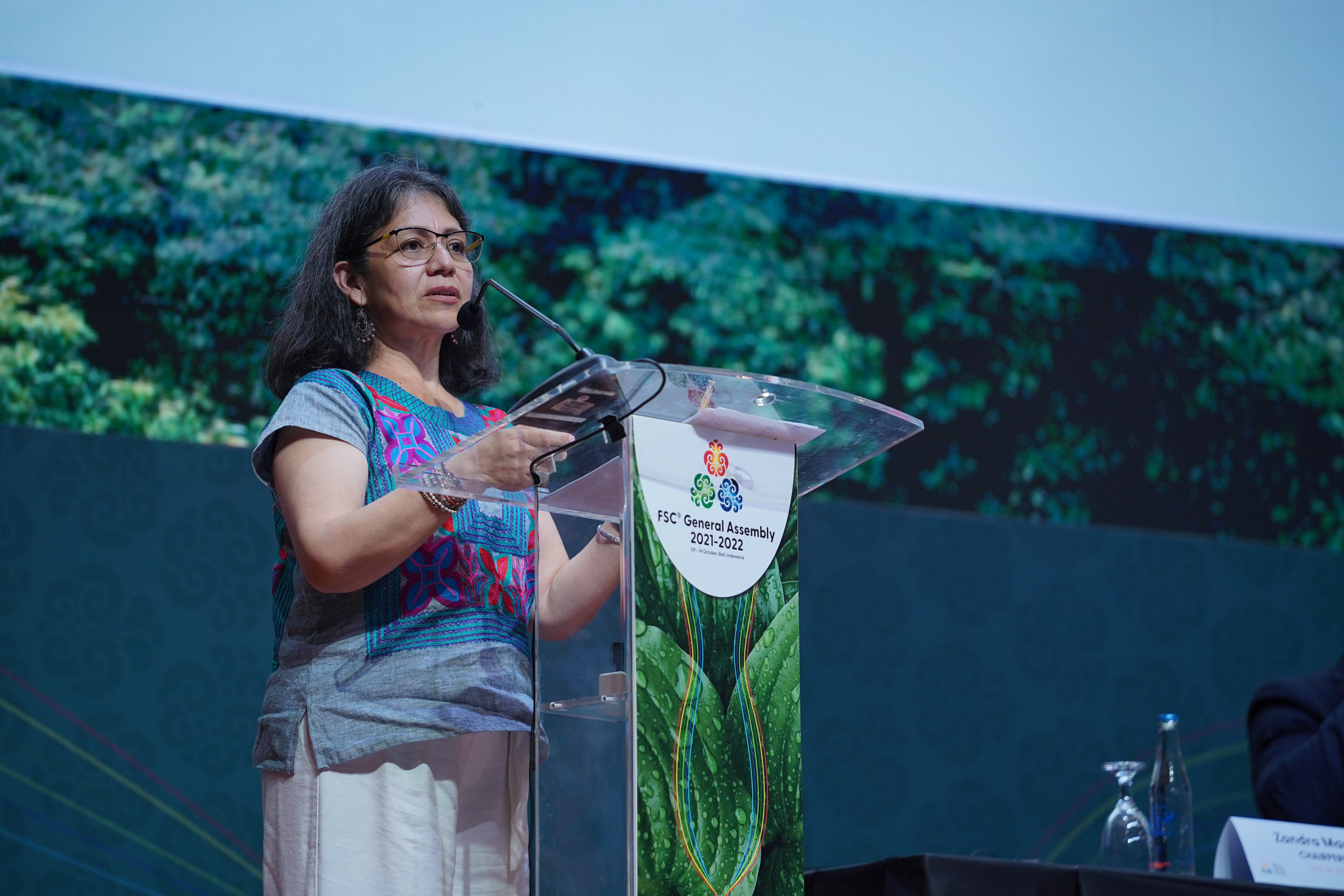 Take a deeper dive into what was discussed by exploring ga.fsc.org or learn more in this video where FSC Director General Kim Carstensen and FSC Members share their insights and perspectives on the significance of the FSC General Assembly.

The 9th General Assembly would not have been possible without the generous support of sponsors. Visit www.fsc.org to learn how to join FSC in leading the change needed for Forests.